Project “Eurocamps in Serbia” is the first project of this kind which had a goal of presenting camping tourism as a sustainable concept that is an important economic sector in Europe. The other goal of this project was to show the extraordinary potentials of this kind of tourism in Serbia and to startnew initiativeson the development ofcamping tourismin our country 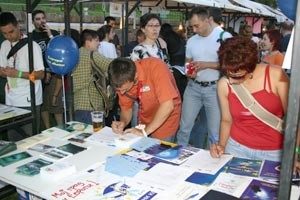 Balkan Youth Union and Youth Council of Belgrade conducted this project in 7 months. First results of the preparation for the project showed that this project will find parts that are more interested and that this initiative can be just the beginning of one strong and live process, but the results are even much better and more precisely focused on the target groups identified at the beginning.
The topic of the CAMPS is more than interesting for all those who are trying to develop new tourism products. It is perceived as one unique sort of tourism (rural tourism) in the region.
Project EUROCAMPS in Serbia in its three phases made a great success and provided a great opportunity for the future activities and new similar projects in the Western Balkan region.
From the first phase, where the members of the team were looking for the precious knowledge, through one valuable seminar-workshop in Novi Sad, up to awareness raising campaign which is still ongoing (as a natural continuance of the project), this project become one multi purpose project and, on its end, both partner organizations started with many thriving initiatives all around Serbia.
The success of all three phases brought more than enough job that needs to be done in the following period.

The aims of all activities were very clear and achievable:

1. Implementation of standards of Eurocamps according to EU standards and forms – BYU and YCB brought the topic of the camping standards in Serbia and new camps will definitely seek to complete all the required standards in order to protect the environment and in order to be more attractive to the foreign visitors; Existing camps (Bela Crkva, Palic, Srebrno jezero) decided to revise their standards and to try to accomplish EU standards for the same purposes;

2. Creation of the Eco Camp according to EU standards in Serbia – as a direct result of this project two new camps should rise on spring 2006 in Bela Crkva (80 km north of Belgrade) and Vilovi (village, 5 km from Nova Varos, south Serbia – 276 km from Belgrade), but also in Novi Sad and Belgrade and project team already started with the preparation of all necessary documentation for the beginning of this process;

3. Public awareness raising on the issues of the environment protection based on EU standards and camping – This aim was accomplished through very positive campaign with strong messages on the environment protection and ecology – based on existing EU standards – The campaign was very successful on the field because it was the only way how to approach to the very isolated and rural areas on the south – people were willing to hear the project team representatives speaking about one very interesting issue – The team mostly tried to explain how this type of business can improve the life in the rural areas. The usual discussion topics were: How to start with income generation? How to create new camps? How to attract visitors? Where to start? One of the most important parts of the project was a good acceptance and the appreciation to the project leaders as a group of young enthusiast who work on the development of their own country. Printed materials were very helpful and made a greater credibility but the most important was a direct, personal contact between project members and members of the community (community leaders, municipality authorities and other local stakeholders and citizens willing to cooperate and to learn something new). Special attention was focused on the implementation of the environmental standards, concerning the fact of a lack of awareness on nature protection in Serbia, which is a strong precondition for the development of this kind of tourism, and tourism in whole. Project team spent time in conversations with the representatives of the local tourism organizations and local
inhabitants talking about the ways to protect the environment, how to solve problems of garbage, sewerage, and water supply.

4. Development of the Youth Tourism possibilities (receptive tourism) as well as the development of the youth mobility in the region and in Europe – This aim is one long-term process and it started with this project, especially through awareness about the possibilities, capacities, and needs for more work to be done in this field. Good examples from EU countries were enough to tackle imagination of the local inhabitants about the creation of the camps that could look like famous European campsites. A vision of one better life just started a creation of one new process and raise awareness about how little is needed in order to improve things in one poor
community. Another big issue, worth mentioning, is that there is a lack of local/country/regional mobility of young people and this could become the way to improve that situation. This project should be the way to initiate more youth mobility in the country.

Besides accomplished aims, project team realized several concrete activities as a direct result of the project: