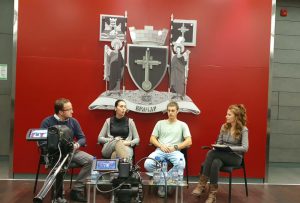 On Thursday, October 10th, online panel named “Art as a Means of Revitalizing the Urban Environment” was organized by CSO BUM and City Municipality of Vračar. The panel was help as part of the traditional manifestation “Vračar Week of Culture”, with the aim of giving young artists and local government representatives a place to discuss about ways in which art can make life better in our cities.

The panel was attended by visual artists Jana Danilović and Andreja Krstić “Chenipe”, as well as the President of the Municipal Assembly of Vračar, Mihailo Grupković. The role of moderator was performed by Danijela Maljević, president of CSO BUM. During the panel, participants discussed the importance of street art in revitalizing and refining public spaces, as well as ways in which local governments in Serbia can support young street artists.

“Vračar Week of Culture” represents a series of events aimed at promoting art and raising awareness of its importance for the development of the local community. This year’s Week of Cultre kicked off with the opening of an exhibition of the works of students from the Faculty of Applied Arts entitled “BUM Generation of Millennials” at the Vračar Municipal Gallery on October 3.  In the period from 4 to 6 October, the “Street Arts Weekend” was held in the premises of the Center for Education and Culture “Božidarac 1947”. After that, on October 8, the play “The Mirror” was performed. It deals with young people who are exploring the image of themselves and the developing their personal identity. At the end of the manifestation, a panel “Art as a means of revitalizing the urban environment” was held.