Activism Fair of 2015 was implemented 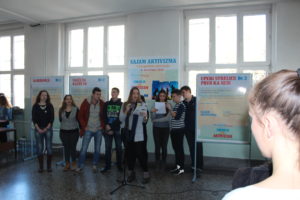 On Friday, 4th of December 200 high school students, activists and representatives of organizations working with youth were present at the Fair of Activism made just for them.in V Belgrade gimnasium.

The main goal of the Fair of Activism was to inform young people about the possibilities for participation and it is organized as a part of the project Active for Equality. This is the second year in a row that Balkan Urban Movement is addressing the topic of young people’s activism with the support of Europen South Foundation.

At the start of the Fair young people had the opportunity to listen about the school authorities efforts in achieving youth activism from the director of V Belgrade gimnasium and later about the efforts of the local authorities from the president of Palilula Municipality. Minic Savic and Stojan Nikolic.

More than 10 organizations working with youth mainly through gender perspective presented their work to the visitors of the Fair. Besides this, visitors were also voting for their favorite proposal for youth actions made by participants of the project during the training for activists.
The initiative that got most of the votes is called Cultural evenings and its goal is to address important topics such as discrimination, gender equality, media misuse etc through cultural content presented during cultural evenings in school such as movie projections, poetry reading, play realizations…
0
ShareTweet