ACTIVISM IS A SHE – workshop in Priština 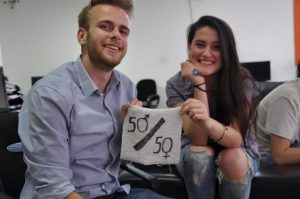 Our participants organized another Patchwork workshop, within the project Activism is a She. This was the second workshop out of three, which are planned to be held in three different cities. This one was held in Prishtina. Other two, one was held in Brcko, other will be held in Belgrade.

There were around 25 young people, who were writing down their messages on pieces of material which all will become a part of one patchwork. As it was in the previous workshop, also was on this one – messages were about the importance of women participation and why activism should be brought from international to the national level, which is the goal of the project.

Main goal of the project is to find new ways to connect national and international activism with a goal to ensure equal standards in implementation of gender equality policies at all levels.

This project is coordinated by NGO Balkan Urban Movement and supported by European Youth Foundation.