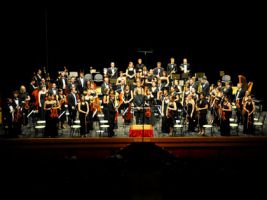 Mission
Connecting through music with Maribor International Orchestra 2012 (hereafter MIO2012) is an international educational project. The purpose of the project is to connect young talented musicians from all over the world in order to achieve excellence and emphasize the cultural diversity that initiates social change. A great part of the project is aiming for development of cultural tourism in the region. It is based on a great program which enables the city of Maribor and Slovenia to share
the global map with others in the field of summer education in classical music.

About the Project International educational project for soloists and orchestra musicians

Location: Maribor and on tour in Slovenia, Serbia and Italy

Vision
MIO2012, which has been encouraged and supported by the European Capital of Culture 2012 Maribor, will continue its mission of connecting young musicians and performing with the best soloists and conductors, and thus carry on with the plans towards achieving the best possible results of cultural aspects in Slovenia, Europe and beyond.
Our aims will be achieved by continuous operation – issuing annual auditions in selected countries (and expanding the area), continuous and close cooperation with the academies of music and the professional state institutions, organization of similar events (concerts of chamber music) as part of the accompanying programme.
In the future MIO2012 will be constantly working with professors, conductors and soloists -the most important aspect being connecting through music. Continuous cooperation with composers of younger generations will offer the possibility of performing new compositions.
The second most important aspect is the care for education of musicians in master classes and other workshops to deepen the knowledge of musical theory, and in which the musicians are involved in the anti-stress, meditation and similar techniques.
The third aspect is constant concerts, touring and recording of audio-visual media. The possibility of connection is here the most powerful – to solicit the target audience which wants something new, to monitor and broaden the horizons, to learn about other cultures, temperament and mentality.
Although the music is of prime importance, a successful concept and presentation can be a springboard for new connections, the spread of interest for the countries of orchestra members and interest in their culture.
Together with our partners and co-organizers we are interested in focusing on the following in the MIO2012 project:

Short presentation
In April 2010 the Delavnica Association (Društvo ustvarjalcev sodobne slovenske kulture – Delavnica) has established the Institute of Art and Culture Delavnica Maribor (Kulturno umetniški zavod Delavnica Maribor) to develop and carry out the international project MIO2012.
The organizer of the project is the Institute of Art and Culture Delavnica Maribor with partners: The Balkan Youth Union from Serbia, Interkultura from Macedonia, University of Ljubljana and Glasbena matica Ljubljana. The project is supported by the Ministry of Culture, the Municipality of Maribor and other sponsors and donators from Slovenia: Institute for Tourism Maribor, Terme Maribor, Narodni dom Maribor, Conservatory of music and ballet Maribor, Ljubljanske mlekarne A-cosmos and Nikon GMBH Slovenia.

The project started on 12 July and finished on 5 August 2010 in Maribor. The orchestra toured in Belgrade (Serbia), Ljubljana, Forli (Italy) and Pesaro (Italy).
122 musicians from 21 countries have been hosted and connected in Maribor, the European capital of culture 2012 and the cultural intersection point for EU member states and candidate member states.

The education has been carried out in two parts:

For this purpose, a call for the auditions in Ljubljana and Belgrade (or with a recording by post) has been issued for young musicians (from 18 to 35 years). In the symphonic orchestra there have been 76 musicians from Slovenia, Croatia, Bosnia and Herzegovina, Serbia, Macedonia, Hungary, Italy, Germany, Spain, Israel, Mexico and Hong Kong. The average age of the musicians was 23.