Days of Belgrade in Pula 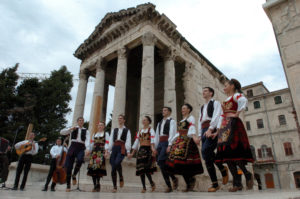 The event “Days of Belgrade in Pula” is a result of cooperation between City Assemblies of Pula and Belgrade and youth organizations Pula Youth, Youth Council of Belgrade and Balkan Youth Union. The kick-off meeting had been held in Pula in January 2004 where the organizers were focused on themes such as intercultural cooperation between two cities and braking prejudices between two nations that had emerged during the 1990’s through mutual projects carried out by young people. It was decided that the event should be held in order to establish a new level of cooperation as well as to continue the cooperation that had begun in the late 1980’s. One of the goals of the cooperation should also be inclusion of business entities in the process as well as connecting them to each other.

The event lasted for five days – from 26th to 30th of May 2004. Many interesting cultural, art and sport activities had been organized during this period in Pula such as presentation of Folk Dance Ensemble “Abrašević” and the folk music orchestra at the main square in Pula as well as a presentation of Belgrade tourist offer. Chefs from famous restaurants from Skadarska Street in Belgrade have been cooking Serbian national specialties and offered them to citizens of Pula along with the Serbian national beverage.

In the gallery of the City Theatre there was a presentation of photography exhibition by a young Belgrade photographer AndrijaIlić. His photography was inspired by national motives. Also,young DJs from Belgrade had presented their music during two nights in the most popular clubs in Pula “Uljanik” and “Voodoo”.

Representatives of youth organizations Pula Youth, Youth Council of Belgrade and Balkan Youth Unionhad played revue basketball and volleyball matches after which they presented their programs and activities in 2004 to the youth of Pula.Continuation of this cooperation between Pula and Belgrade has been envisaged in September when Days of Pula shall take place in Belgrade with similar type of program.