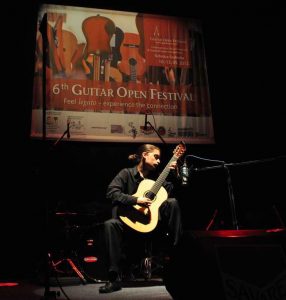 The Sixth international music festival and international competition of classical guitarists named VI GUITAR OPEN FESTIVAL, with the promotional motto “FEEL LEGATO – EXPERIENCE THE CONNECTION” took place within the period from 10/05 to 13/05/2012 in Subotica, organised by Balkan Urban Movement from Belgrade and Centre for Sustainable development from Subotica, supported by the Ministry of Youth and Sport of the Republic of Serbia, Austrian FORUM, Parliament of Subotica town, SAVAREZ, Oralent of the representative of Swiss company “Curaprox” and in cooperation with “Kosztolányi Dezső” Theatre and “Lifka” Cinema.

The Festival has been divided into few segments, from morning till late evening, by the following concept:

Concert program was organized during all three evenings of the Festival, from Thursday to Saturday.

The opening ceremony has been held on the first evening, in the “Kosztolányi Dezső” Theatre in Subotica, where the director of the Festival, Zoran Anić, had officially opened the Sixth international music festival and international competition of classical guitarists “Guitar Open Festival” (http://www.subotica.info/eventview.php?event_id=41255). A large number of visitors had a chance to enjoy music performance of classical guitar virtuoso Gabriel Gullien who currently lives and works in Austria (http://www.subotica.info/eventview.php?event_id=41255). The concert was helped and financially supported by Austrian FORUM. With fascinating interpretations of classic pieces as well as pieces by composers from Latin America, Gullien had given the performance worthy of the opening ceremony and delighted the audience.

The evening was rounded off a superb performance by internationally renowned guitar trio Amicus. With spectacular interpretations of classical hits, direct contact with the audience and the energy that flows only between true friends which these three artists are, they have managed to raise the crowd to their feet.

Gabriel Guillén was born in Venezuela. At the age of eight he started learning guitar with Uruguay guitarist Mario Vidalino which introduced him to the music of Argentina and Uruguay. He continued his education at “Escuela Superior de Música Jose Angel Lamas” in classes of professors Leopoldo Igarza, Jose Gregorio Guanchez and Alberto Espinosa. From 1984 to 1988 he was performing in most of the cities in Venezuela. He won the first prize at “Antonio Lauro” competition organised by Rotary International in 1987. He also studied in classes of Abel Carlevaro, Luis Zea, Rafael Benatar, Bartolomé Diaz and Franka Verhagen. In 1988 he had won a scholarship for studies in Europe and after that he moved to Wien. There he studied in the classes of professors Walter Würdinger and Konrad Ragossnig. He performed in Europe, South America, USA and Japan. He won many awards among which “Merit” Prize of the Austrian Government, “Amigo de Venezuela”- the award of Venezuela Positiva Foundation, honorary award of the Rotary Club Caracas-Avila, as well as 25 more awards in Mexico, Argentina and Italy. He teaches master courses in more than 34 countries. Gabriel Guillen is one of the most recognised guitarists today.

Trio “Amicus” – After many years of friendship, the idea of forming a trio “Amicus” was born in order to give a creative note to that friendship. The trio was established at 2010. They wanted to play by a repertoire somewhat richer than usual guitar repertoire, so they had the partitures of Mozart’s “Little night music” transcripted for guitars from partitures composed for orchestra (arranged by prof. Igor Ivic). They also plan to transcript some other interesting classical pieces. Trio is currently performing across the country.

Ognjen Grcak (1978) graduated at FMU in Belgrade, in class of Srdjan Tosic. He specialised in USA (Indiana State University, Bloomington) in classesof Nuccio D’Angelo, Ernesto Bitteti and Nigel North. He was awarded with a first prize of the Guitarart Festival in 2001. He currently teaches at music school “Josip Slavenski” in Belgrade.

Milos Janjic (1979) graduated and had his MA diploma at FMU in Belgrade, in class of Srdjan Tosic and he had his PhD at Maastricht Conservatory in Netherlands, is class of Carl Machione. He won awards at many competitions at home and abroad such as Mottola, Italy (1998) and Sinaia, Romania (2001). He performed a lot in Serbia, but also in Greece, Netherlands, Italy, Montenegro and Romania. He teaches at the Faculty of Arts in Nis and at music school “Josip Slavenski” in Belgrade.

Slobodan Milivojevic (1980) graduated classical guitar at FMU in Belgrade, in class of Srdjan Tosic. He starts PhD studies at Indiana State University in Bloomington where he gets the prestigious Artist Diploma by working with Professor Ernesto Bitteti and Nigel North. He was awarded with the first prize on the international Latin-America competition and on “Indianapolis Musicale”. He performed in Serbia, Bosnia and Herzegovina, USA and Norway. He teaches guitar at music school “Josip Slavenski” in Belgrade.
Programme:
W.A. Mozart: Eine Kleine Nachtmusic  k.525: (arr. Igor Ivić)
Allegro, Romanze, Menuetto, Rondo

Paulo Bellinati: Baiao De Gude
The second night of the Festival had brought news to the revue programme. The Artistic Jam Session, which was the theme of the second evening, completely fulfilled the expectations. Amalia Miller, Katarina Maric, Relja Tuduric, Boris Lemajic and many other musicians amazed all music lovers in the Blues Time club. This unusual guitar programme could be shortly characterised as a blend of classical guitar, jazz, blues and a few notes of commercial music. Aside from the exceptional show for the audience, The Artistic Jam Session was an opportunity for young talented musicians to present their virtue in form of improvisation, cooperation and public performance.

The closing ceremony of the Festival was organised in the hall of the Theatre “Dezso Kostolany”. After the announcement of winners and award ceremony, the art director of the Festival has spoken. The sixth international youth guitar festival and competition was officially closed in front of the large audience with performances of Annamaria Szlama, the guest from Hungary and the winner of the last year’s International guitar competition in Szeged, Nikola Begović, the last year’s winner of the GOF and the Sabbatka band. The winner of the Guitar Open Festival 2012 is Marcin Koziol, the young guitarist from Poland, whose performance gained the most points in the pro category. Winners of other categories are: Luka Radovanović (V1), Lijora Šijački (IV1), Ema Kapor (III1), Jaka Škoberne (II1) and Dominik Elek (I1).

Annamária Szlama (HUN)
Annamaria Szlama was born in Budapest. She started playing guitar when she was ten. She continues her education on the Béla Bartók Conservatory in Budapest in class of Professor Sándor Szilvágyi. She is a winner of the Hungarian National Competition Andres Segovija 2007. She currently studies at the Franz Liszt Academy in Budapest, in the class of Professor András Csáki. Last year she won the first prize of the competition in Szeged. She participated in many festivals and master classes. Her plan for the next year is to visit Italy within the Erasmus Programme.

Nikola Begović
Nikola Begović was born in 1991in Bačka Topola and he lives in Subotica since 1992.He got his first musical education in Music School in Subotica, at the Department of Classical Guitar in class of Professors Petar Milović and Marko Srdjević. This was the period of his first achievements on republic, regional and other competitions where he won many awards, along with other prizes and diplomas. He continued his education at master classes of the well-known classical guitar players: Marco Tamayo (Cuba), Jean-Marc Zvellenreuther (France), Sante Tursi (Italy), Gerhard Richenbach (Germany), Goran Krivokapić (Montenegro). At 2010 he continues his education at the Academy of Arts in Novi Sad at the Department of Classical Guitar in class of Professor Zoran Krajišnik. Within that period he performs in many countries in the region. He is a winner of the international competition within Guitar Open Festival in Subotica in Pro category up to 35 years of age. He is currentlyat the second year of the Academy. Beside the education and guitar, this young man is also engaged in education of young generations of guitar players. Aside from classic, he also plays other genres as well as electric guitar: rock band „Sabbatka“and ethno band „Paniks“, whith whom he has been performing in ex-YU and other European countries.

Sabbatka bend
The band was formed in May 2006 in Subotica and it was originally named Black Sabbatka. They were performing in local clubs and released the first demo named White Maiden during 2007. Sabbatka performed at many festivals across the country, including Tribute Hits, GBOB Challenge 08, Hit Radija 202 and CMOK fest where they had been awarded a first prize. In 2009 they participated in the first season of Battle of Bands on OBN television and they also performed a lot. The Band’s name has been made of name for Subotica in Hungarian language – Szabatka. Band members: Mihaly Szucs – vocals, faggot; Nikola Begović Johnny – guitar, vocals; Arpad Tomo – guitar; David Szucs – bass guitar, vocals; Neven Tili – drums, vocal.

The categorisation, timing and choice of programmes have been made in order to match the annual music school programmes. Also, by analysing the students’ performance of parts from different periods, the expert jury can more easily get insight ofknowledge and level of virtue of each participant individually. The competition took place in the halls of cinema “Lifka”and theatre “Kosztolányi Dezső”. Each contestant had been provided with conditions for rehearsing before their performances in professional dressing rooms of the theatre. The expert jury was formed of prominent local and foreign educators and musicians. The conclusion has been drawn that Serbian school of guitar had reached very high level of quality and that the competition had been very highly ranked among the other European and regional festivals.
The prizes for the most successful contestants:
1.   Solo performances within the GOF 2013 and the International festival in Szeged 2013;
2.    Guitar accessory kits (sets of strings manufactured by French producer Savarez, guitar cases, notes, note stands, T-shirts and other materials), provided by the festival;
3.    Participation in other international festivals;
4.    Certified diplomas as a proof of participation, prizes and courses attended. 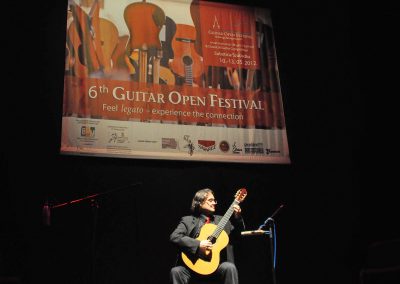 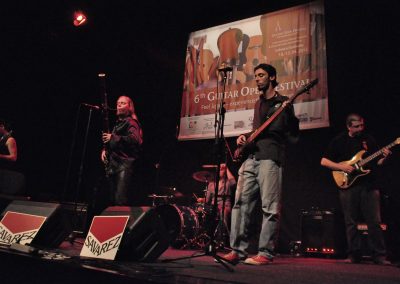 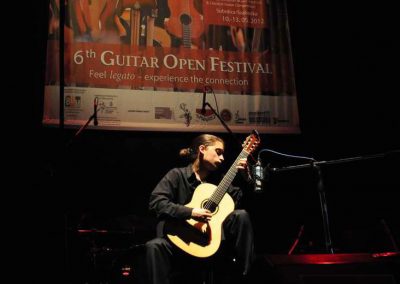 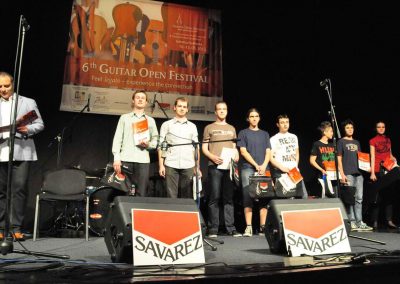 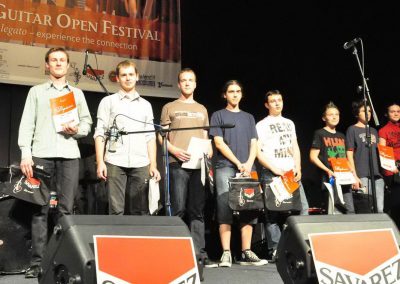 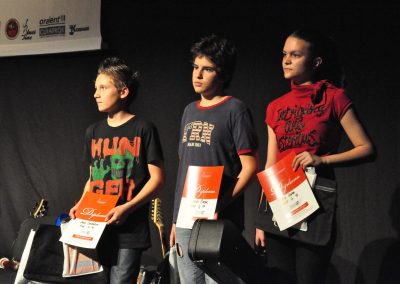 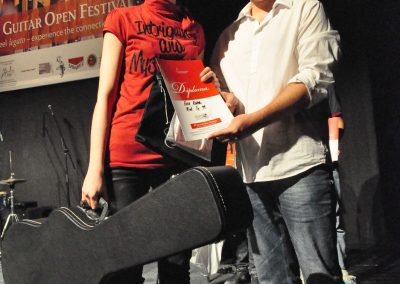 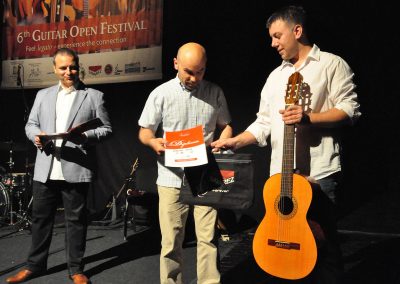 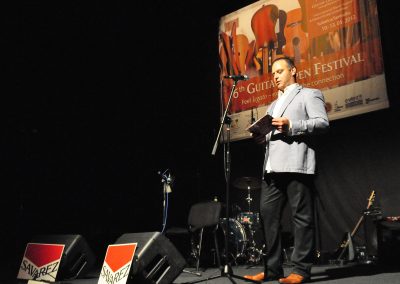 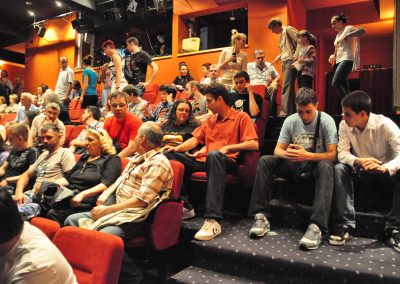 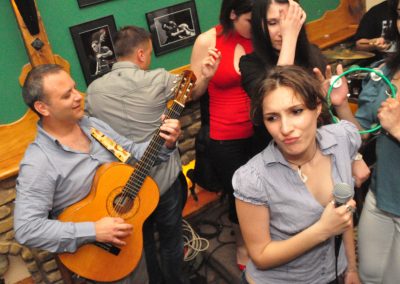 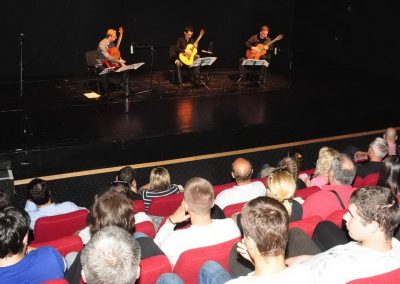