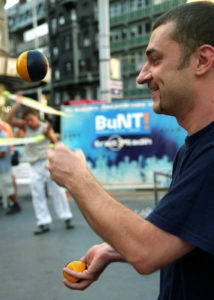 Belgrade Youth Council and Balkan Youth Association have organised a celebration of the International Youth Day for the first time in our country on 12th August 2003 from 4 to 9 h PM, with a multimedia event located in front of the Albania Palace in KnezMihajlovaStreet.The event was composed of a range of activities including different culture, social and youth-oriented content such as video-materials, young DJs, performances of various artists and young painters who were painting “Youth Hostel” on a big canvas.

On that day we also started the initiative for developmentof legislation related to young people, i.e. for creation and adoption of the Law on Youth as well as for construction of the first real “Youth Hostel” in Belgrade, when more than a thousand signatures of supporters have been collected. The signatures have been submitted, along with the official request, to the Committee of Youth and Sports of the National Assembly of the Republic of Serbia and after that the meeting with its president was held.

The hours-long event was attended by a large number of citizens, mostly young people. The Vice President of the Assembly of the City of Belgrade, Mrs.Rebeka Bozovic attended the event in the name of the Assembly.

Celebration of the International Day of Youth has been followed by six TV stations and eleven daily newspapers.