Musicians up to 35 years from Europe and beyond were invited to Maribor, The European Capital of Culture in 2012, the cultural meeting point of EU member states, candidate countries, or other where participants were involved in an intensive training in orchestral playing. They took part in the Orchestra Academy 2011/2012 and soloists’ education within Master Classes (workshops) in 2011/2012 for the purpose of MIO2012 is to connect talented musicians who are full of energy, in order to keep young musicians informed, provide target training and promote classical music as an important integration factor for young people and in order to achieve excellence and emphasize the cultural diversity that initiates social change.

There were two symphonic programs chosen each year according to the highest pedagogical and artistic level. The program was highly demanding for all orchestra sections. Moreover, both, the musicians and the auditors could identify themselves with it for the program was based on the idea of connecting different cultures and diversity. It emphasized the diversity of music composed by different composers (also different nationalities). The program especially emphasized the human nature and destiny and compared the German and Slavic tradition. We intended to bring the orchestra to the highest artistic level through intensive playing on the part of the young orchestra musicians and their in-depth studying with mentors. Moreover, there was a possibility to further discuss the chosen literature at round tables. The project connected a variety of musicians from different countries, which were valuable interlocutors also in these organized debates on intercultural dialog and possibilities of employment during the project that upgraded day-to-day dialogue between the musicians of different nationalities. In the third year the program was chosen to celebrate the 50th Anniversary of the signing of the Elysée Treaty.

Master Classes dealt with the compositions of the highest pedagogical value for the particular instruments and were studied and presented at the final concerts. Altogether 40 different highly demanding virtuous pieces were performed yearly. 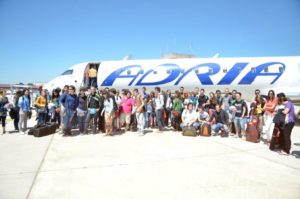 The intercultural dialogue took place through exchange among guest professors, artists and participants themselves: on organized round-tables, through different events, through vocational training, participants visiting more than one country within the project. It was initiated by artists and organizers of concerts and concert tours. Members of all partners’ organizations were involved with their responsibilities and their works; they all had contacts with media and target audience in their countries and countries where the results were presented.

We kept close collaboration with international education and cultural institutions and partners and new possible partnerships are taken into serious consideration. The results of our project have been seen by members of diverse institutions who want to be involved and provide the education for their young musicians.

Our results brought us to an invitation to start the whole concert cycle (4 concerts) at one of the London concert venues.