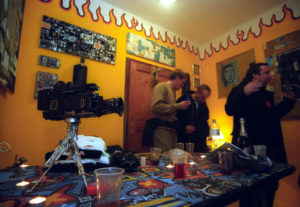 As a part of cooperation between the Youth Council of Belgrade, Balkan Youth Union and World of Youth from Ljubljana, from 11th to 14th December 2003 we organized a return visit to the City of Ljubljana and to the Republic of Slovenia with a goal of development of intercultural exchange between two capital cities and promotion of cooperation between young artists and young people in general on specific projects.
Exhibition of paintings of a young artist from Belgrade took place in the exhibition room “Alkatraz” in Ljubljana on December 12th and a young DJ from Belgrade supported it with a music inspired by Serbian folk motives. Over 150 young people from Ljubljana have visited the exhibition. Films directed by young authors from Belgrade have been played in the National Film Archive of Slovenia on December 13th and a young director and a producer from Belgrade with representatives of Faculty of Dramatic Arts from Ljubljana delivered a lecture related to Serbian cinematography. The film has been seen by over a hundred young people from Ljubljana.
Representatives of Youth Council of Belgrade and Balkan Youth Union had met with representatives of Ministry of Education of the Republic of Slovenia–Youth Office, Assembly of the City of Ljubljana – Youth Office, and Youth Council of Ljubljana and discussed the idea of long-term cooperation in the field of youth in politics. A video material about a Youth Hostel in Ljubljana had also been prepared in cooperation with TV STUDIO-B which will be showing it on their channel along with the report on visit to Slovenia. It will also be shown during the meeting with the President of the Executive Board ofthe City Assembly, Mr. Nenad Bogdanović, which will have a goal of building a youth hostel in Belgrade.