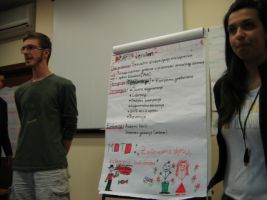 This meeting was the gathering of Youth NGOs leaders from SEE region that primarily work on development and promotion of human rights and HRE. Focus was on the creation of programs to bring the youth violence into the mainstream of HRE.

Description of the seminar following the agenda.

Once more, a good selection of the participants made a lot of space for an extraordinary meeting of young people from the whole region.

Since the arrival, participants showed a good mood for work and new friendships.

The first session was an introductory one. All participants present themselves and their work on Human Rights in their own communities/countries. Different professional, educational and cultural backgrounds announced very interesting discussions.

Motivated by an excellent and interesting lecture participants took a part in describing the particular incidents from their own communities.

As the continuance of this introductory session participants presented their reports on acts of violence among youth in their own countries. We witnessed several different problems in different communities and in the following discussion we tried to discover the roots of these problems, the breaking point when problem occur and started to grow. This session was a group work.

After all presentations facilitator gave a general overview which was the introduction to the discussion which provoked participants to participate very lively and with a lot of emotions.

The conclusion was that, unfortunately, all presented incidents from the whole region tend to be deep and very complex as problems that only large society scope could deal with.

Nevertheless, this brought all participants to discuss the posibilities how to tackle those problems from their own micro perspectives.

Wrapping up the day, moderator gave a brief introduction for the following day which should be a workshop day – tend to bring the answers about the differences between cultural backgrounds as one of the major sources of conflict.

The day started by the presentation of Mr. Dragan Veselinovic who gave participants a broader overview of Social anxiety, ignorance and language barrier as sources of conflict. Bringing his rich experience in work with adolescent delinquency he gave an essential output for this seminar. Participants were very willing to talk with Mr. Veselinovic who is a psychologist and work in Special School for young delinquents “Vasa Stajic” as one very unique state institution of this kind.

First Workshop was dedicated to Compass where participants had an opportunity to discuss the language barriers as one of the sources of conflicts. Small word games that moderators played with the participants of each group made a big language confusion between participants from different countries/language backgrounds. They made a nice input for the later discussions. Live examples of misunderstandings because of different languages, or even dialects, brought a fruitful work. This workshop opened a lot of very interesting topics which are, according to the participants, one of the most important sources of ignorance and conflict. The following discussion was very complex and difficult to moderate because there were a lot of different observations and very temper presentations.

The second Workshop led by Miss Elena Dzartovska – “Differences between youth from different cultural background – Our real knowledge, assumptions and prejudices” – has been organized as a group work – 7 different groups. She made a great task for the each group and left them to find their own solutions.

Each member of BYU team had a task to “cover” one group and to try to answer to all questions participants had related to the topic they choosed.

After the Workshop 2 group leaders presented the conclusions of his/her group to the rest of the participants. The conclusions were very interesting and brought a lot of space for discussion so it was difficult to interrupt presenters because other participants posed a lot of questions.

Wrapping up the day, moderator gave a brief introduction for the following day which should be a mix of presentation and workshop day – tend to bring the answers about the awareness raising campaign models. There was no introduction about the game moderators prepared for the next day.

The day started with the presentation of Roma culture – acceptance or tolerance. Moderator described a situation in Serbia and brought another huge perspective of this problem to the participants.

The conversation that followed showed that problems with Roma people are different in different countries. Participants gave their own perspectives from their own local communities related to the problem of acceptance and tolerance of Roma people.

After the break, moderator gave a brief introduction for the following Compass game related to the problem of little Perhan, Roma boy who had problems in the school because of the accusation for stealing money from other pupils. Participants were surprised but also very willing to participate in this amusing role playing game.

Three volunteers had time to prepare a brief sketch to make an introduction to other.

Participants divided into groups. One group was a family of little Perhan including himself. The second group was a School Board led by a school principal and a teacher who accused Perhan for stealing. The third group was NGO who is fighting for Human Rights trying to help the family of Perhan. The fourth group were lawyers and judges including members of jury. The case is opened. Family of Perhan sue the school for abusement of human rights by wrong accusation.

All members were very active and showed an extremely good talent for acting.

Thanks to these amazing talents, this game was a winning combination.

A hundred of question came out from this prosecution process.

On the end, we had a decision from the jury which decrees a financial penalty for school and public announcement about Perhan innocence.

An excellent discussion came out from this case – so strong that each group members was fighting for the interest of his own group so strong.

Unfortunately, a lack of time for spreading this discussion led us to the next session which we smoothly started with a discussion about the assumptions and prejudices. Participants showed wide experience in dealing with prejudices and wrong assumptions. Thanks to that fact this discussion session was extraordinary useful for the further work during the seminar.

After the coffee break, Miss Marte K. Husdahl had a Lecture about NGO proposals for the bringing the issues of youth violence into the mainstream of human rights education and non-formal educational activities. She managed to point out how much these programs are important as well as how much it is necessary to make a local initiative projects.

On the end of this very amusing day, the discussion was extremely good and took a lot of time, so moderators had a lot of work to do to leave enough space for all participants to take a part in discussion.

One of the very important things to mention is the fact that 100 % of participants took a part in discussions.

Wrapping up the day, moderator gave a brief introduction for the following day which is planned to be a big brainstorming day about conflict resolution and non violence activities.

This day started with a lecture about the factors of rising violence and ignorance.

The Very interesting approach of the lecturer, Mr. Martin Pinteric, brought huge space for questions of the participants so moderators tried to give more spaces for the lecturer to give a broader picture on this topic.

After the lecture we made a Simulation related to Conflict management which, once again, showed us participant’s huge talent for acting.

After the lunch break moderator started with the next session by giving the floor to participants in order to leave space for presentation of their work in Human Rights Education.

This session was organized as a press conference roll play where all participants was acting again as journalists who posed questions to one who was on the stage, presenting activities and answering questions to journalists.

On the following workshop participants got a task to create the drafts for successful programs on human rights education suitable for national educational curriculas (non-formal educational activities).

Each participant (group leader) clarified the role of its NGO and explained more about the long term effects of the programs they will conduct.

Wrapping up the day, moderator gave a brief introduction for the following day which is planned to be the “All Different All Equal” day.

Starting a new week, we started with Presentation of developed awareness raising campaign models –  introduction of the Compass, as well as with presentation of EYF resource centre and program “All different – All equal”.

After the break we continued with workshop on Brainstorming on European Campaign for Diversity and Participation “All Different All Equal”  in order to bring out the issue about how to make it closer to the youth in the region, since a small number of people are participated in this campaign, mostly because of lack of knowledge.

Afternoon session we started with the topic of Local participation against violence. After moderator’s introduction and presentation of best practice models, participants divided into groups and we started with the next workshop Think Global – Do Local. Participants had a task to create a concrete project/program draft proposal for local participation against violence. The big issue was a question what we could do in order to prevent violence and violent behavior of young people in our own communities.

Each group representative (leader) had to present the proposal – especially its strong points and to protect the proposal in front of other participants who were trying to find its weak points.

The whole group was measuring the quality of the drafted proposal according to the predefined principles of quality proposal.

Wrapping up a very tough day, moderator gave a brief introduction for the following day which is planned to be the final working day.

Day started with the continuance of group work from the previous day since there were no enough time for all group presentors to present their proposals.

This session showed to all participants that different social background requires different approach and various sets of measures in order to tackle the problem properly.

After the lunch break, each group representative had to present the ideas group brought, and other participants had an opportunity to ask one simple question to each presenter.

The following session – Creation of the network – brought information about technical issues and activities time table for future network communication and activism as well as roles and responsibilities of the administrators of the network.

BYU web administrator gave a brief presentation and instructions about further communication in the network trying to bring all types of communication in one system. This approach didn’t find pretty good acceptance among the participants because of a variety of communication software and systems they are using / MSN, ICQ, YAHOO, FACEBOOK, SKYPE etc.

The total overview was completely satisfactory to all participants but most of them recognize the fact that this was a long and tough seminar with very stuck schedule, but everyone confirmed they had such a great time in discussions and they learned so much about the issue of Human Rights Education which will be useful to them in their future work in their own communities.

Day started with a joint breakfast which was one sort of complete overview of the seminar.

We could hear a lot of different experiences participants found during the seminar and it was one very amusing and interesting breakfast session.

On the end, moderator gave an overall wrap up of the whole meeting and presented plans for the future joint work and possible joint projects in the region in order to tackle huge problem of youth violence by setting up a whole package of measures for prevention of raising a violent behaviour among youth.

All participants depart after 12 o’clock.